I stood there, staring at the spot where John Gladstone, once stood.  Around me were the rolling hills of Yorkshire Dales where John was brought centuries ago.  I trace my fingers over the face of the rock after leaving wild flowers at the base.  I come here every year on his birthday to celebrate his life which only improved after he saved a gamekeeper's life.

I used to play here as a child, loving to run up the path and collapse on the grass.  I used to lie on my back and stare up at the sky.  Not once did I ever dream that my life would change and that this place would come to mean more to me than it already did.

It happened two years ago when I was researching my family's history.  My friends had told me that they had researched theirs and had made some very exciting discoveries.  I was curious to find out what stock I came from.  It was quite a shock for me when I discovered that one of my ancestors was a slave.  He came from a plantation near Montego Bay in Jamaica.  I plan to visit the plantation next year.

What I do know is that I'm proud to be a descendant of John Gladstone, a man who suffered hardship, horrors and indignities at the hands of those who profited from his misery.  I am going to honor his memory by writing his story.  I want future generations to know about him and be proud too.

I glance at my hand were there used to be an engagement ring.  I can still remember the shock on Dan's face when I told him about John.  He stared at me, "But you don't look like you have any black blood in you," he exclaimed.

He was referring to my blond hair, blue eyes and fair skin.  I looked at him.  "I suppose this means that  if I looked like I have black in me, you and I wouldn't be together."

At first he didn't want to admit it but, finally he said, "It changes things considerably, Alice."

"What exactly has changed, Dan?  I'm still the same Alice you fell in love with and proposed to.  I still look the same, don't I?"

"Alice, you must understand where I'm coming from."

"What I understand is that your love is skin deep."  I took off the ring and gave it to him.  Standing up, I said rather coldly, "Goodbye, Dan."

He took the ring, hesitated for a moment and then rising to his feet, he muttered, "Goodbye."

I didn't bother to see him to the door.  After he left, I went to my room and had a good cry.

Stooping down to arrange the flowers, I whisper, "Thank you, John for saving me from making a terrible mistake."  I was single but happy.  I'm not ready for another relationship right now.  Besides, I'm going to be too busy writing his biography.


I should mention that this story was inspired by a true story of Jenny Thornton, a British woman who discovered that one of her ancestors was a slave.  He was taken from Africa to Jamaica and then to England.  He was taken by a wealthy widower's wife and named baptized in his name.  Life for him improved when he saved a gamekeeper's life.  Unlike Alice, Jenny is married.  Both women are proud of their ancestors.

This is a response to the Thursday Photo Prompt – Stone at Sue Vincent’s Daily Echo. 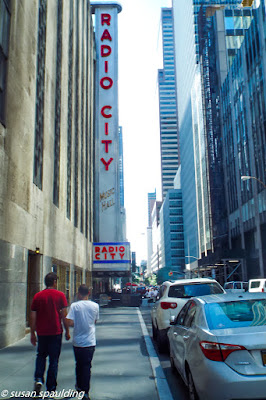 A Day in New York

ablessedwriter
I enjoy spending time with my family and reading my Bible. I am a Christian woman who loves the Lord and writing about Him.